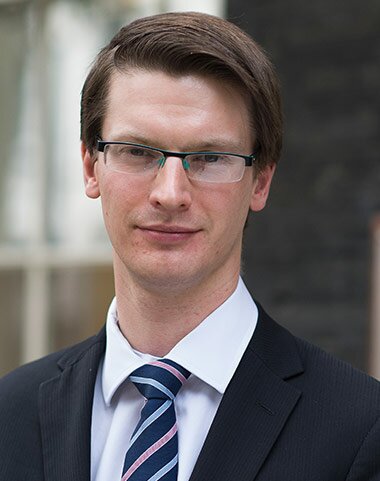 Richard’s practice encompasses all of Chambers’ core practice areas spanning the overlap between public law and landlord and tenant law. Richard appears in all levels of the Court and Tribunal system, whether alone or led, and accepts instructions from local authorities, private registered providers of social housing, private landlords and management companies as well as tenants, leaseholders and applicants for local authority resources. Where appropriate, Richard appears as sole counsel in the High Court and is currently being led in the Court of Appeal.

Prior to pupillage, Richard read History at Gonville and Caius College, University of Cambridge and is a Denning, Hardwick and Eastham Scholar of Lincoln’s Inn.

Richard frequently appears for both claimants and defendants in proceedings under Part I of the Anti-Social Behaviour, Crime and Policing Act 2014. Richard has extensive experience of bringing and defending associated committal proceedings and has an interest in cases that concern the full range of local authorities’ powers and duties. Richard is familiar with bringing and defending public law defences against local authorities and with dealing with cases where the defendant’s capacity to comply with an injunction is in doubt.

Richard is frequently instructed in appeals under s.204 or s.204A of the Housing Act 1996 and in associated judicial review proceedings. Richard acts for local authorities and for tenants. He is able to utilise wider knowledge of local government law in such proceedings, for example recently successfully arguing on appeal that a local authority had unlawfully contracted out its homelessness review function to the relevant decision maker. Richard is also able to run more conventional challenges to local authority decision making recently succeeding in an appeal concerning the meaning of ‘vulnerable’ in the context of Part VII of the Housing Act 1996.

Richard represents both landlords and tenants in possession proceedings both in the private and the social rental sector. In both cases Richard seeks to keep landlords out of unnecessary difficulty by providing clear and robust advice as to their duties and as to the evidence they must provide.

Richard has experience, acting for both landlords and tenants, of cases where proceedings are defended on the basis of alleged none compliance with inter alia duties said to be owed under the Equality Act 2010, the Children Acts or the Human Rights Act 1998. Richard appears in the full range of housing cases including succession disputes, possession proceedings on the basis of arrears of rent or anti-social behaviour, and cases where landlords are confronted with vulnerable tenants who are unwilling or unable to comply with their contractual obligations.

Richard is currently instructed as junior counsel for the appellant in the Court of Appeal in a case concerning the lawfulness of the succession regime under the Housing Act 1985 (R (Turley v Wandsworth, Secretary of State intervening – pending).

Richard has successfully challenged a local authority’s use of external review officers without following the statutory scheme of delegation.  Richard provides broader advice to local authorities on the use of their stock, statutory security and the interaction between their housing, children’s services and adult social services duties.  When advising local authorities, Richard is aware of the ever tighter constraints on resources and is concerned to help local authorities achieve their objectives while ensuring that they are clearly advised on how to discharge their duties. Richard has particular familiarity with cases involving more than one department of a local authority, having formally acted in care and adoption proceedings as well as cases concerning the discharge of local authorities’ duties towards children in care.

Richard is currently being led in a series of challenges by way of judicial review to local authority allocation schemes under Part VI of the Housing Act 1996 and represented (as junior counsel) the successful respondent local authority in R (Woolfe) v Islington LBC [2016] EWHC 1907.

Richard represents leaseholders, freeholders and management companies in service charge disputes in the First-tier Tribunal (Property Chamber) and advises on obligations and liabilities, and costs recovery, under the terms of long leases. Richard has experience of bringing and defending challenges to the reasonableness of service charges, the entitlement to recover identified costs against leaseholders and the enforcement of the costs of major works following s.20 consultation. Much of Richard’s leasehold practice is concerned with the cost or necessity of major works programs.

Richard is instructed in a number of cases concerning unlawful eviction and, in particular, the liability of landlords for the actions of their agents.

Richard frequently acts in claims relating to disrepair in residential property whether brought as a standalone claim or as a counterclaim to proceedings for possession or the recovery of service charges.

All areas of Richard’s practice that concern public sector bodies require a broad knowledge of the powers and duties of those bodies including those developed by the Equality Act 2010 and the Human Rights Act 1998. Richard formerly acted off-panel for the Treasury Solicitor through the Junior-Junior scheme exposing him to a range of litigation concerning public bodies.

Richard represents local authority claimants and defendants in proceedings under the Housing Act 2004 appearing in both the First-tier Tribunal (Property Chamber) (‘FTT’) and the Magistrates Court.

In respect of regulatory work in the FTT, Richard appears in claims for rent repayment orders against private landlords as well as appeals to the FTT against enforcement notices by both landlords and managing agents.

In respect of criminal proceedings, Richard represents parties in cases concerning failure to obtain requisite licences under the Housing Act 2004 or to comply with the conditions of such a licence or of enforcement notices.

Prior to pupillage, Richard worked for the Ministry of Justice developing policy and briefing ministers and senior officials.